“It’s wrong to ask for help in entrepreneurial circles. It feels undermining. But it shouldn’t.”

At just 16 years old, Ivy Early Entrepreneur Appalla Saikaran was familiar with the difficulties of networking with mentors, investors, and other entrepreneurs. He knew intimately how nerve-wracking it could be to ask questions and find like-minded people willing to collaborate and invest in nascent ventures. To tackle this challenge, young Appalla decided to build his own application – SCOPE.

SCOPE is a dynamic and personalized network that connects entrepreneurs with like-minded people, content and opportunities. It aims to build a collaborative community where users can share their experiences, learn from each other and ultimately be successful.

Appalla was motivated to build this platform because he realized that there are people out there willing to mentor young founders like himself. “But,” Appalla believes, “youngsters like myself should be willing to ask for help. It is never wrong to ask for help; but it is wrong to know that you need help and still not seek it. That was the main reason why I decided to create SCOPE.” 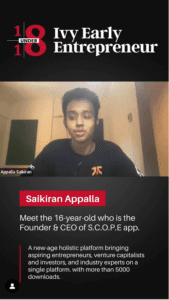 WATCH: Appalla talks about his journey

Since founding SCOPE, Appalla has received immense global attention, winning the monumental Global Kids Achievers Award, a spot at the Junior CEO program certified by Brown University and an invitation by Google to visit their office!

But how did he get here?

Appalla is a student from Hyderabad. He finished his high school education at Birla School Pilani, and then moved on to Manipal University, Jaipur to earn his undergraduate degree in Data Science. In the winter of 2021, he participated in the Ivy Early Entrepreneur Program where he was afforded the rare opportunity to work on his fledgling startup under the guidance of real-life successful entrepreneurs including Forbes 30 Under 30 awardees Arun Saigal and Kristin Kagetsu, and BusinessWorld 40 Under 40 awardee Aman Gupta. Here, Apalla learned the ins and outs of essential entrepreneurial concepts like market research, competition analysis, design thinking and fundraising over a 7-day period, culminating in a start-up plan that included a mobile app prototype! 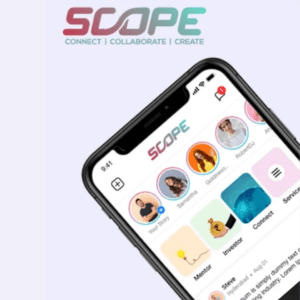 He credits his success to many people and networks in his life, including the Ivy Early Entrepreneur program which he commends for offering him the opportunity to ask questions, receive feedback, and for platforming the startup ideas of young entrepreneurs like himself. By constantly hustling and staying determined to reach his goals, Apalla succeeded in taking his ideas and plans forward, and became the founder and CEO of his own start-up with SCOPE. The pilot version of his mobile app was downloaded by 5000+ people, and every day, the app is found and downloaded by more and more people — a commendable feat for anyone, but especially for a budding, teenage entrepreneur!

Have an idea and don’t know where to start? Join The Big Red Group’s Ivy Early Entrepreneur program to become a successful teenager.