Mastering the Art of Negotiation For Teens!

“A negotiation is a strategic discussion that resolves an issue in a way that both parties find acceptable. In a negotiation, each party tries to persuade the other to agree with his or her point of view. By negotiating, all involved parties try to avoid arguing but agree to reach some form of compromise.”

Negotiations are a great tool to solve major world issues as they act as a very efficient medium to initiate discussions! The Great U.S President John F. Kennedy said the following statement in his inaugural address on the 20th of January 1961 –

Let both sides explore what problems unite us instead of belaboring those problems which divide us.

Let both sides, for the first time, formulate serious and precise proposals for the inspection and control of arms–and bring the absolute power to destroy other nations under the absolute control of all nations.

Let both sides seek to invoke the wonders of science instead of its terrors. Together let us explore the stars, conquer the deserts, eradicate disease, tap the ocean depths and encourage the arts and commerce.

Let both sides unite to heed in all corners of the earth the command of Isaiah–to undo the heavy burdens . . . (and) let the oppressed go free.”

After every negotiation, one party always ‘wins’ and the other must settle for less or compromise in some way. In this article, we will be discussing the various aspects involved in the skill of negotiation!

The Elements of Negotiation

The very essence of any negotiation is to present one’s position/stand on the concerned issue and present conditions that the other party will agree to. This process continues until both parties can form a resolution that all parties can mutually agree to. The act of negotiation can be thought of as a battle where the participants strategize and plan by learning about all the other sides taking to craft strong arguments and defend with counters!

There are five key elements that must be kept in mind during negotiations:

1. Trust: For any negotiation to be successful there must be a sense of trust between the participants to ensure that they do not feel that they are being taken advantage of. Trust also refers to sticking to proposals/commitments that are made during the negotiation and not backing out.

2. Relationships: When going into a negotiation, you must take note of the kind of relationship shared between you and the other party. You must be mindful of how you present your stand and make sure that as the negotiation unfolds, the relationship between the parties must remain the same, if not progress further.

3. Interests: This has to be the most important element of any negotiation as interests and benefits form the foundations of negotiations. The wants and interests of the parties form the backbone of discussion and are the key drivers of the same. Good negotiators focus on the other parties’ benefits as well to frame solutions that are mutually beneficial.

4. Communication: There are a number of skills that one must master to learn to speak and listen effectively as they greatly help in ensuring one’s negotiations are successful. Apart from that, a foundational skill such as good communication really helps build confidence in teenagers! Actively listening to the other party, presenting your stand in a fair manner, and bringing forth resolutions that benefit all are just some of the many points that one must work upon to tackle the skill of effective communication!

5. Alternatives: One must always prepare for the worst in every situation. There may be situations where the other party denies to agree to certain terms. At such times, one must identify the consequences and implications of agreeing to let go of that term and make an educated decision on it.

The Process of Negotiation

Every negotiation has three stages to it:

1. The Planning Phase: This is a pre-negotiation phase where one must prepare by devising the plan of approach, the communication style, and the tone that one will carry when proceeding to the negotiation. You must have clear objectives and plan the desired outcomes you expect out of the interaction. There are times when the other party won’t accept the terms stated by you or the party you represent so you must prepare a least desirable outcome. Finally, one can never ‘over-prepare’ so you should take your time with this process and be confident!

2. The Engaging Phase: This is when we get into the actual negotiation stage and this forms the main body of the same. You should make your proposals and actively listen to what the other party responds to. You must not be very pushy with your demands while keeping your objectives in mind. Research has shown that a passive-aggressive approach to any negotiation has the highest potential to turn out a success!

3. The Closing Phase: The length of negotiations also plays a critical role in shaping its outcome. You must keep in mind that it must not be too short (so as to lead to a situation where both parties are uninformed) or too long (such that it tires out the other party and makes them irritable). Once you find the sweet spot for concluding negotiations, you must follow the after-negotiation actions. These include following up on commitments, articulating the discussions that took place, acquiring formal proposals/agreements from the other party, and many more!

Every negotiation has two possible outcomes: 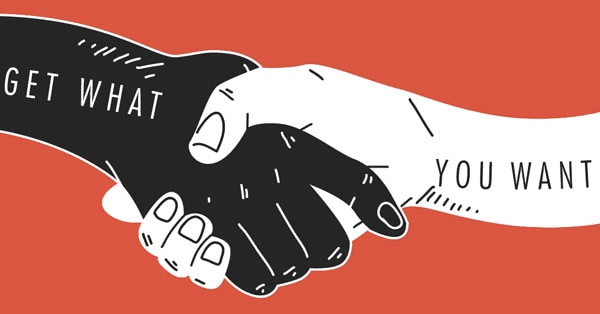 The Don’ts of Negotiation!

Don’t be pushy! To have a successful negotiation, you must let go of the “all-or-nothing” attitude as it is hardly going to work in your favor. You should prioritize the needs/desirable outcomes that you expect out of the interaction. This is because, in 90% of negotiations, you have to let go of many of your demands to accommodate the ones proposed by the other party. Everybody hates bullies and people will not think twice before walking away if the negotiation has one. Apart from the “all-or-nothing” attitude, you will have to let go of any pride/ego that you carry when you walk into any negotiation.

Don’t underestimate yourself! This is a very common mistake that people new to the skill of negotiation commit. One must keep themselves in very high regard as long as you do not undermine the other party. When enquired about your expectations, do not shy away from asking for more than what you deserve (obviously in a calm and non-aggressive manner). Another trick used by negotiation maestros is to give their ‘adversary’ the idea that they are winning the negotiation by undercutting your “unrealistic outcomes” (not the ones that you plan to get approved)!

Don’t let emotions get the better of you! In any negotiation, do not let emotions interfere with your approach as it can lead to blunders that cause the interaction to go horribly wrong. The best way to avoid any such blunders is by being calm and friendly throughout even if the other party is not!

The 4 Golden Rules of Negotiation

The key to any successful negotiation is not that difficult to master and sticking to these five rules is sure to help you in future negotiations that you take part in.

1. Listening is Key: Finding people that talk a lot is not that difficult but coming across people that are great listeners is very rare. You do not need to be the loudest voice in any interaction to make an impact, being a good listener and acknowledging what others have to say goes a long way in ensuring that the negotiation goes in your favor. A golden rule of hand that one should keep in mind is to listen 70% of the time and speak in the other 30%.

2. Exit if you have to: You must know that you are not going to win every negotiation you take part in. There are times when you have to concede and you must know when to walk away from negotiations that do not go your way.

3. Keep it Formal: Going into negotiations, you must keep your feelings/emotions aside. Your complete focus must be on your objectives and the points that you need to put forward. Remember that negotiations are like war and you must not take offense from the words/actions of the other party.

4. Do your homework: If there is one thing that high school has taught us the best is to do one’s homework! The better informed you are about the issue being discussed, the higher your chances will be of having successful negotiations. Few points that you must prepare yourself with include – understanding the needs of the other party, your negotiating limit (the least objectionable term), and your options or the options of the party you represent!

Now that you know everything there is to know about the ins and outs of becoming a better negotiator, you must remember that the most important element of a good negotiator is that they are very engaged in conversations and understand the importance of both listening and speaking. It is always great to have a win-win negotiation so all the sides are happy and you can part ways on good terms after negotiations.

Below is a very fun activity that was born from Roger Fisher’s famous book – “Getting to a Yes”.

The activity is nicknamed “The Battle for the Orange” (the teams are not told this name as the activity has a secret element to it) and features two groups of teenagers. One of the groups is secretly told that their objective throughout the game is to get the orange to make orange juice. On the other hand, the second team is secretly informed that their primary goal is to get the orange because they need the peel to make an orange cake. Then, we get the two groups in front of each other and set a timer for 3 minutes, place an orange between them and just say “Go!”

This is an amazing experiment demonstrating human behavior and the lack of information and instruction regarding the process of the experiment makes it successful. On account of this, we get to see a number of different outcomes from this experiment. A large number of times, one group just takes the orange and refuses to give it back or negotiate. Results from the experiment also indicate that groups will be inclined to divide the orange in half and go ahead. Lastly, communication between the groups goes a step further and they actually converse about the reasons they need the orange – leading to an ideal situation where both the groups understand that they want different parts of the fruit and negotiate successfully. Now, this is what I call a win-win negotiation!

Negotiation is a fundamental skill in today’s world and is key to moving ahead in every organization that you are a part of. The importance of this skill is not discussed a lot but negotiations can prevent wars and solve major world problems!